You can find my latest research article about Gijsbert Verbeek below, which was published in the BVMA Magzine in July 2014.

Hubert de Launay takes us through his journey to research and identify a violin by Gijsbert Harmens Verbeek, a stepson of Hendrik Jacobs.

About five years ago, during my final year studying at West Dean College, we visited the Gemeentemuseum (GM) in the Hague, in Holland. This was not the first time that I had seen instruments made by early Dutch violin makers but it was then that I became conscious of their quality. Viols and cellos by Pieter Rombouts, and violins and violas by Jan Boumeester, Hendrik Jacobs and Cornelis Kleynman left a lasting impression and I have been dedicated to the ‘Dutch School’ ever since. This has led me on a journey to make a discovery of a rare violin made by the relatively unknown maker, Gijsbert Verbeek.

During the 80 years from the end of the 16th century to around 1670, Amsterdam had grown into the trading capital of Northern Europe. With its population growing seven-fold to over 200,000, because of waves of immigrants arriving from Belgium, France, Portugal and Spain. Trade expanded partly because of investments by wealthy immigrants. An example of the huge wealth created can be seen in the case of David Leeuw who was a successful merchant trading with countries as far as Russia. He had a fortune of more than one million guilders at his death in 1703. To put this into context, cittern and violinmaker Gerrit Menslage bought a house with workshop in the centre of Amsterdam in 1656 for just 6,000 guilders. A painting of David Leeuw and his family is still found in the Rijksmuseum in Amsterdam today, and is particularly interesting because it shows David’s son playing a beautifully detailed Dutch viol.

Links with music in Italy

Amsterdam had trading links with Venice which had a rich musical tradition and, because Amsterdam was ruled by merchants rather than the church or a royal family, musicians came to the ‘free city’ to have their music printed and published. The presence of Italian musicians and composers in the city together with prominent Italian merchants is probably the reason why Dutch violinmakers were among the first to have made violins in the Italian manner. Although the Dutch have their own style of making, when looking at early Dutch violins you can see that the Dutch makers studied the Italian schools very closely, starting in particular with the models of the Amati family. Nicolò Amati had just finished the famous ‘Alard’ violin in 1649.

Italian violins were certainly for sale in Amsterdam at the time. An auction advertisement from 1671 announces the sale of Cremonese violins and much Italian music. The Amsterdam violin makers started making ‘copies’ of the Italian models to supply the demand and possibly to try and keep the trade in their own hands. Cornelis Kleynman offered several different models, one being more in the style of Rogeri. As the preferred model changed from Amati to Stainer, so the Amsterdam makers changed too. By about 1685, Hendrik Jacobs was putting more ‘Staineresque’ features in his violins and this style of work was continued by his stepson Pieter Rombouts after he took over his workshop.

Gijsbert Verbeek is one of the Dutch makers whose work has intrigued me. He was also the stepson of the prominent maker Hendrik Jacobs and it is likely that he received his training from him. We can assume he had been a violinmaker all his life because two years before his death he is still registered as a violinmaker but, for some reason, we only know of less than a handful of instruments. What happened to this very talented maker? Apart from a few documents in the archives in Amsterdam there is very little known about his life. His mother remarried,to Hendrik Jacobs, on 20th August 1654. (Jacobs was living in the Sint Antoniebreestraat at that time, the same street as the Dutch painter Rembrandt van Rijn.) If Gijsbert trained with Jacobs, perhaps he started soon after this when he was aged 12. His new step-father was only 13 years older than him. We also know that Gijsbert was later married to a niece of Jacobs. The marriage certificate shows that he married Jaepie Willems, the daughter of Maritje Jacobs, Hendrik Jacobs sister, on 18th January 1669.

In the few violins that are known to have been made by Gijsbert there are many similarities to the work of Jacobs, especially of the period up until 1670. This can be seen in the way the arching, edgework and scrolls are cut. The same hand can be found in Gijsbert’s scroll and some of Jacobs’early scrolls. It is likely that both of Jacobs’ stepsons had a hand in his instruments at different times. By 1685, the hand of Pieter Rombouts, who is 18 at his time, can be seen in the scrolls of Jacobs’ later violins. Rombouts has become well known to us, having taking over his stepfather’s workshop in 1704. He made many instruments up until his death in 1728, which is regarded as the end of the golden period of the Dutch school.

My thought is that Gijsbert could have worked for other violinmakers for much of his life because there were other established makers in Amsterdam, including the Menslage/Boumeester workshop which employed a number of makers. In 1681, the year that Jan Boumeester died, Gijsbert lived around the corner of the Warmoesstraat, less than a minute’s walk away from Boumeester’s workshop. There is no specific evidence but perhaps he worked for Boumeester? By then Gijsbert is 39 years old and a highly skilled craftsman which is evident in his violin of 1682, the only known instrument by Gijsbert with an original label (see begin article), which is owned by the Dutch Musical Instrument Foundation (DMF). This violin has a one piece quilted maple back. One piece backs are a frequent feature of instruments made in Amsterdam in that period. It is a stunning instrument which has a Venetian quality to it, especially in the varnish. High quality pictures of this violin can be found at www.muziekinstrumentenfonds.nl.

The last time that Gijsbert’s name shows up in the archives is 42 years after his death, when one of his violins is sold at auction in 1759, as part of a collection belonging to the bookseller Nicolas Selhof from the Hague. Other instruments in the collection included early English viols as well as violins by Amati and Stainer, and the Dutch makers Kleynman, Boumeester, Jacobs and Rombouts.

In the past few years, I have re-visited the Gemeentemuseum frequently with my colleague Gudrun Kremeijer, who is based in Amsterdam. We first started to look at the collection to make a list of all the Dutch instruments, including some notes for the museum. On one visit, I came across a ”French violin” with a N. Amati label – the curator told me that the museum had bought the violin in 1933 as part of the Scheurleer Collection. (Mr Scheurleer was a well known instrument collector at that time.) It was registered as a Grandjon but I had no doubt that this was a violin made by a talented maker in Amsterdam in the 17th century. After showing the violin to Gudrun she agreed with my view but neither of us could then pin point which early Dutch maker. A year later we saw the rare Gijsbert Verbeek violin (1682) in the collection of the DMF, and we noticed similarities between the two violins. A few months later I contacted the DMF and they were kind enough to allow me to have access to the original Verbeek violin. After the initial discovery, 18 months before, Gudrun and I were able to compare the two violins side by side. In examining and photographing the instruments, this is an analysis of what we found. The pictures on the right show the violin made by Gijsbert Verbeek of 1682 in the collection of the DMF and on the left is the violin from the GM.

Scroll: Both scrolls show the same tool marks, which are especially visible at the back of the scroll. Deeply cut fluting at the bottom and a rounded V-shape fluting at the crown of the scroll. These rounded V-shapes can also be found on the scrolls of early Hendrik Jacobs violins. The narrowest point of the scroll is slightly forward and you can clearly see the thick bevels on either side of the first turn. The bevels on the scrolls of ‘the Jacobs Family’ are usually quite distinctive especially on the scrolls of cellos made by Pieter Rombouts. It almost looks like a border running around the edge. The scroll on the GM violin is of a rare quality because there is still a lot of thick, unpolished, reddish brown varnish to be found. 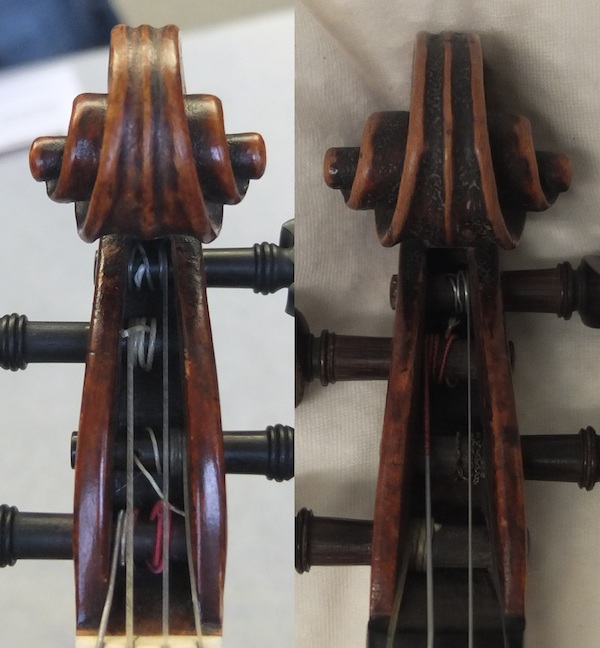 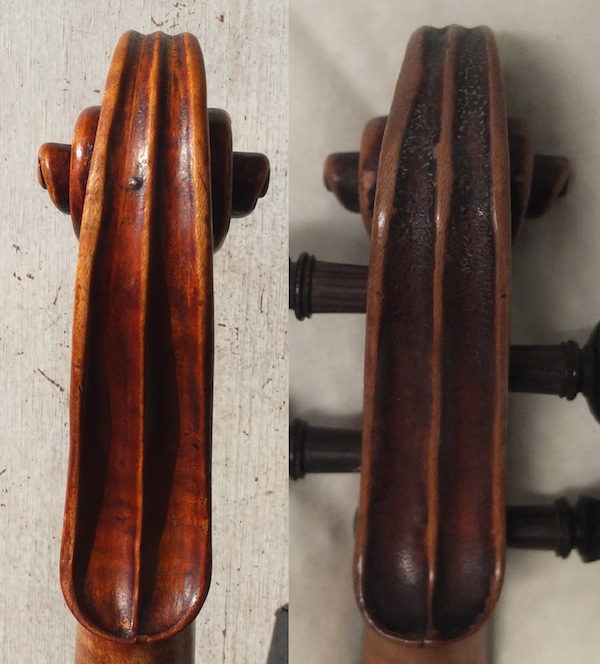 Front: A dendrochronology has been carried out on both violins by Peter Ratcliff. Both fronts are typical of the wood used in the low Countries and in England until about 1710 to 1720. The GM violin has the latest ring on the bass side dating it to 1652. The treble side is earlier with the latest ring near the saddle, dating it to 1636. The DMF violin is dated, to the last visible ring, at 1670. Peter said that there is a strong correlation between the two sides, although they are not necessarily from the same tree.

F-holes: Both F-holes are laid out in the same manner and have been cut perpendicular to the ribs, with the eyes cut by knife rather than an f-hole cutter. The fairly large and deeply cut nicks are cut into the elegant stems. The lower part of the f-holes sweeps outward with a subtle fluting in the wings that leads into the c-bout. 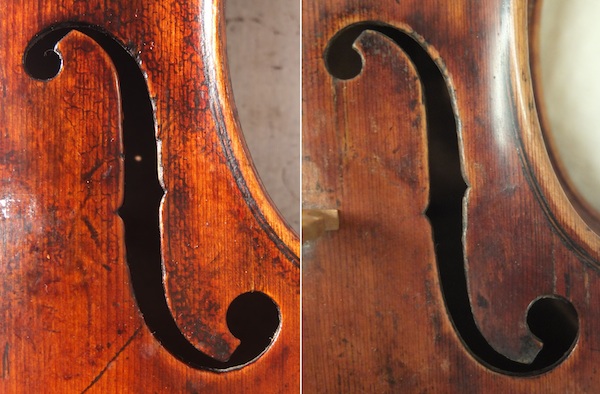 Edgework & inlay: The black strips of purfling are unmistakably made from whalebone which was commonly used in Amsterdam at that time. The inlay, 1.6 mm wide, is executed very finely on both violins. The whalebone strips vary slightly in thickness and the mitre in the corners deviates with the ‘beesting’ extending from the c-bout inlay which is clearly visible on the back. The back on both violins are still in a very fine condition, you can still see some clean knife cuts around the inner edge of the overhang. 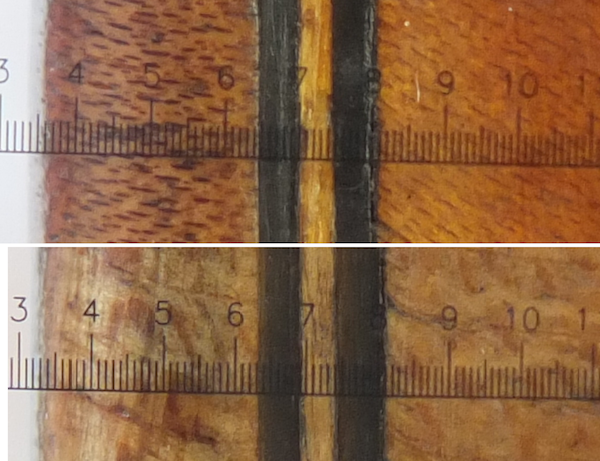 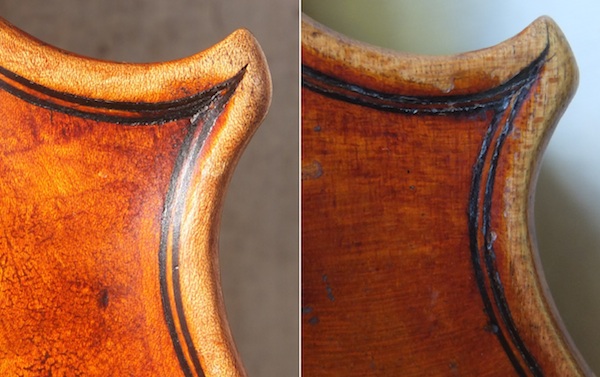 Construction& Arching: The construction of the GM violin has unfortunately been replaced when they re-thicknessed the plates and raised the ribs but the locating pin under the button can still be found. The back arching is beautifully cut in an Amatistyle with a broad fluting around the edge. A tracing of the arching clearly shows the precision with which both archings have been cut. 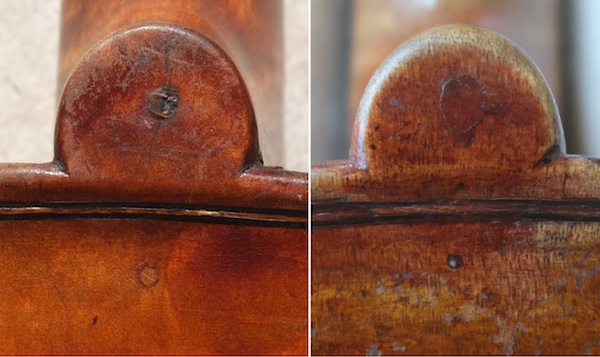 Conclusion: We came to the conclusion that the two violins show the same experienced hand in all their different parts. The scroll and back on both violins are in superb condition with tools marks that overlap one another. The DMF violin has been made in the middle of Gijbert’s violinmaking career. With very little other evidence of his work and only one original label it is difficult to date the violin from the GM. Although the dendrochronology of the front suggests that it could be an earlier example, it could well have been made 15 years before or, even, 35 years after the 1682 violin belonging to the DMF. 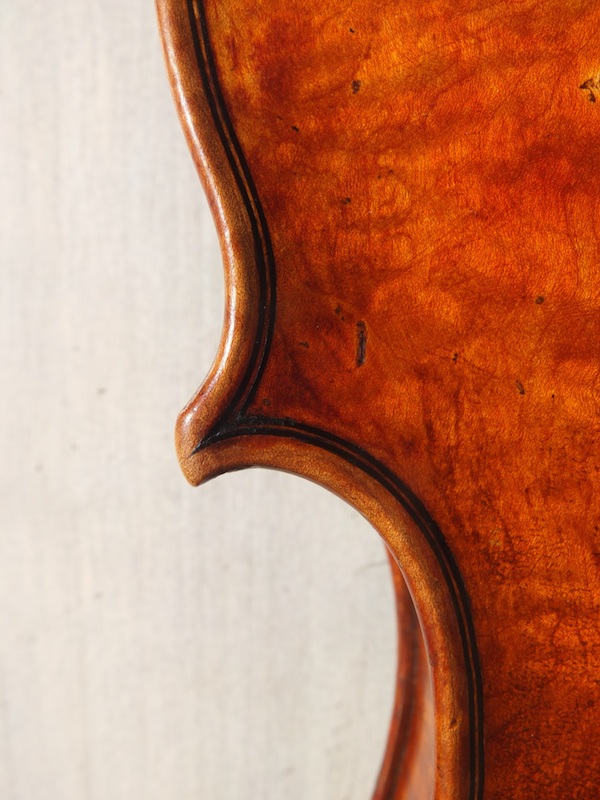 I would like to thank Gudrun Kremeijer, John Dilworth, Peter Ratcliff, Shem Mackey, Frits Schutte, Jolanda Zonderop and the Chi Mei Foundation for their advice and help during this research.

Hubert has recently returned to Amsterdam to work for Andreas Post violins, where he will continue his study on the Dutch violin school.

After graduating from West Dean College in 2010, he gained experience in London making and restoring instruments with John Dilworth and Michael Byrd, whilst teaching part-time at West Dean College.